This video is from Sunday while I was cleaning Mr's little lair .


In the last couple of days Radar has started turning into a real dog.  He is playing, cutting his teeth so doing lots of chewing, responding to voices, and definitely noticing new things.  When I expanded his living quarters he spent a nice amount of time trying to figure out the ex-pen wires.  Of course he is a baby so he sleeps a lot as well.


A friend of mine recommended some great noise downloads so we've been listening to children and babies, thunderstorms and firecrackers, dogs barking, and construction.  Some of those children sound maniacal but it is good for Radar to hear it since I don't have those noises in my house everyday (thank goodness!). 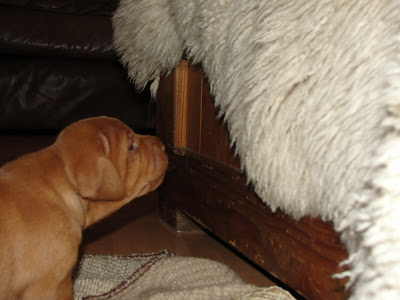 Pixie is getting bored with no runs for the last two days or she is looking forward to him getting a little bigger.  She just hopped into the box and bopped him on the head with her paw to try to get him to play.  It was a little more than he is ready for but she can be a fun Momma when pups are able to really play.  His response initially was to give a little yelp and then sidle up to the food bar for a snack.  As you can see from his growth chart he isn't missing too many meals.