I've made a lot of stops...
Friday and Saturday were visiting days.  Friday after taking a little nap I loaded up Roady, Pixie and the McTrio for a trip to the Alzheimer's Day Center where my dad works part time.  The little guys went for some Meet-a-bunch-of-people and See-how-sweet-I-am time while the big dogs did a little agility, obedience and conformation demo.  The puppies were a hit - Roady and Pixie were too - but who can resist a puppy?  Even a woman who never pets the various dogs that go there had to pet these guys.  The boys kept their teeth and claws under control which was a major bonus considering all of the potentially fragile skin in the room.  I had several takers for the boys, but never fear, I left with everyone in tow.  Amazingly, for as much of a spaz as she can be, I think Pixie has potential to be a therapy dog.  She was good about sitting or standing quietly to be petted and for one man who was in a very large /high wheelchair she carefully jumped up with her front feet only resting on his knees so he could pet her.  I was a little concerned it was going to be a full out leap into his lap but she was a very good girl. 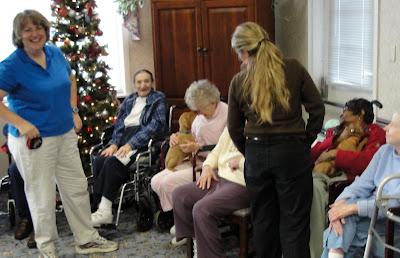 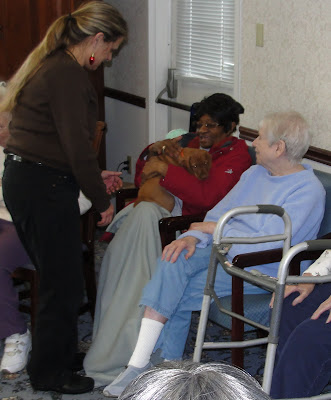 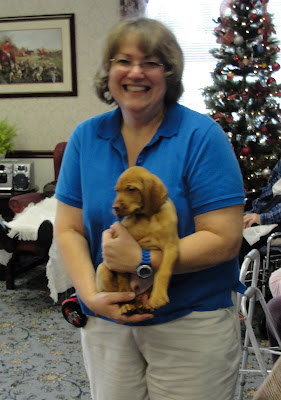 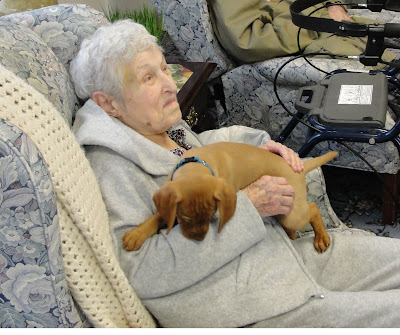 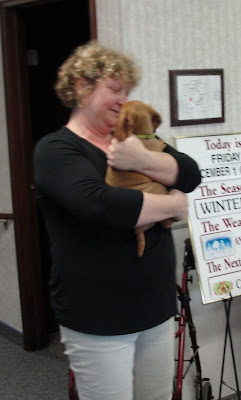 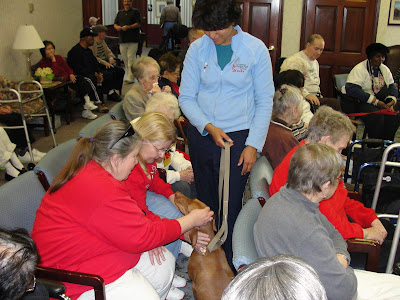 After the visit, the boys went for solitary visits to various friends.  Each visit was for a few hours so they got some time on their own, encountered a new situation, a new dog, and then got to come back home to mom and brothers.  This way their first time to their new home isn't their first time away.  Making a few of these visits helps make the transition easier and the puppies more comfortable with new things.  With only three they'll each get a decent number of visits.


Thank you so much to each of you for helping make these boys as wonderful as they can be.

Saturday was more of a big day of running around for me than for the boys since Drew had a wrestling tournament that lasted all day.  However, Quick (blue) went for a visit with Chad, Chrissy and 2nd cousin Rooney down in "the big city".

Nimble (green) and Jack (orange) played McVelociraptor, and figured out multiple times how to break out of the pen.  Each time I came home they were free.  Nice.  Well they had fun.  I had a lot to clean up.
The original plan was we were going to take advantage of the great weather go for an outdoor field trip and play with some birds.  Wrestling trumped that so we are going to brave the elements before it gets too nasty and go out this morning.