Since Great Uncle Roady is not going to be a playmate to the pups, Uncle Rocket came in to meet his nephews.  Despite being particularly attracted to other dogs he thought these guys were only slightly interesting.  I say give it a few weeks when they get to the real play stages and they might actually be dogs to him. 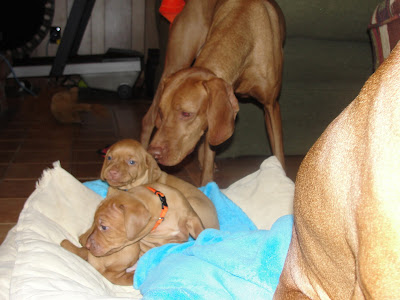 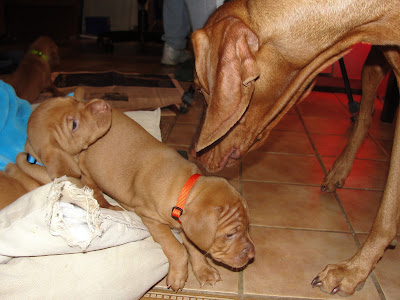 We had a photo session this am with mom.  I'll probably be able to post some of those in the next couple of days.  A few of them are posted at http://picasaweb.google.com/cherryraern.  She also has some from last week there.  They are soooooo cute!

On their second time out today they actually all pottied and started doing some playing.  Imagine how much fun they would have if it was actually pleasant out there!   I do wish it was warm out.

It looks like Jack might be the first out of the box.  If he would ever shut up long enough to really figure it out!
Posted by Pam Williams at 7:01 PM