Daz came to play!  Interestingly, neither she nor Radar seemed to care too much one way or the other.  Daz only had time for Pixie and Radar didn't seem to be too interested once the initial pleasantries were over with but they warmed up after a bit.  He was very excited about the butterfly coming outside though.

His play sessions are getting longer.  He just finished a 30 minute session with Pixie followed by some tugging in his pen with the hanging toys.  Also I can no longer blame just Henry for an inside poop :-P

Radar can "run" up and down the stairs outside now.  It didn't take much for him to figure them out.  There were a few falls down them when he wasn't paying attention and stood next to them but fortunately they are the perfect stairs for learning on since they are deep and not too steep.

He's going to sleep downstairs tonight.  I'm working and he has started wanting out around 4am to potty since he has started eating 2 meals a day.  This way he has his papers available shoudl he wake up and his bedding doesn't get dirty if Henry sleeps through his crying (not likely but then H gets to sleep before work as well.) We'll see how it goes. 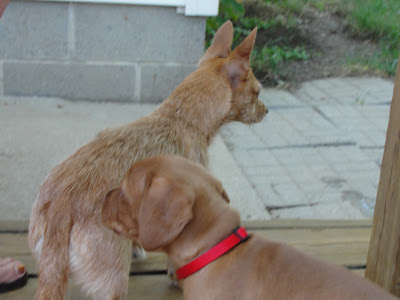