Today had a few firsts for Radar.  He took his first car ride since his eyes have opened.  It's nice to ride with Mommy and big brother.  They keep good company in the big crate in the van. We went to Cincinnati to visit with Rhoda's litter that is 6 days older than R out of Pixie's cousin Kai. She had 6 lovely pups or as they should correctly be labeled, hooligans.  We've been planning to visit when Radar's eyes opened but the timing didn't work out for me or Rhoda.  This morning I asked Henry if he would take us there since I worked last night.  He not so grudgingly said yes and off we went!  Yeah!  Thanks Henry! 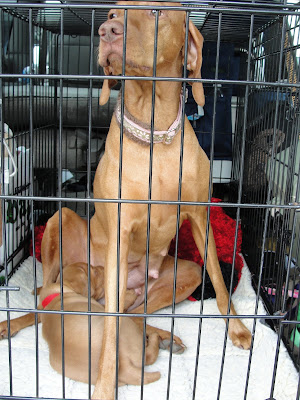 Radar's 2nd first was to be outside in the grass.  He never had a worried moment.  Tail was up, head up looking around.  What a trooper!  It is very typical for pups to be worried about the great outdoors so I was quite pleased with his behavior.


The third first was meeting his 6 sweet cousins.  How can he act like it's no big deal to be around a bunch of little dogs like him when he has met a very limited number of dogs - like 3?  The only time he had an issue was when one of the bruisers grabbed him by the flank and tried to pull him around.  His reaction was to try to walk away and one time he cried out but he did as much play as an almost 4 week old can be expected to do.  Again, I was quite pleased with his reactions/behavior. It looks like there was a lot of sleeping from the pictures but it was temporary. 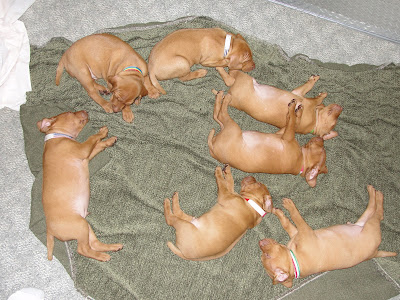 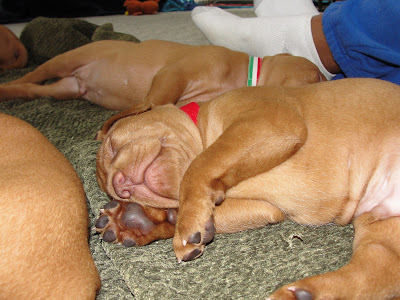 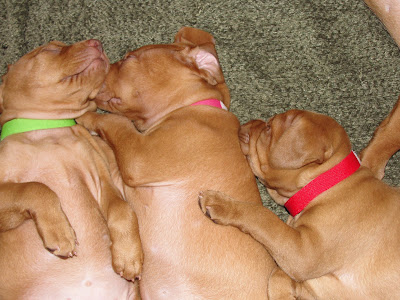